The two combined entities will have a 15.7 per cent share of India’s domestic passenger market. Air India Express – a subsidiary of Air India doesn’t operate in the domestic market and flies only between India and Gulf routes.

Tatas raised their stake in AirAsia India to 83.67 per cent in December 2020 and are likely to complete the acquisition of the remaining 16 per cent stake from Malaysian airline group AirAsia Berhad by the end of this month.

However, an integration of Vistara’s business with Air India is going to take longer time as negotiations are still underway with Singapore Airlines which owns 49 per cent in the joint venture.

Tata Sons, which assumed management control of Air India in January, has started the process of integrating the four airlines under its belt. As part of this process, all four airlines- Air India, Air India Express, Vistara, AirAsia India, and ground handling firm AISATS will move into a single office.

Sources said that the Tatas have identified an office space in Gurgaon where it will lease office space of 70,000 square feet. “To optimise resources, increase teamwork, and have higher synergies at work, it has been decided to shift the various entities under a single roof in Gurgaon in a phased manner,” a person aware of the development said.

A team from Tata Realty- the group’s real estate firm is working on the project led by its Managing Director and CEO Sanjay Dutt. Consultancy firm EY has also been roped in for the project.

Air India currently has its headquarters at Airlines House situated in Central Delhi where it shifted from the iconic Nariman Point Building in Mumbai in 2013. The airline’s low-cost subsidiary Air India Express is based out of Kochi. 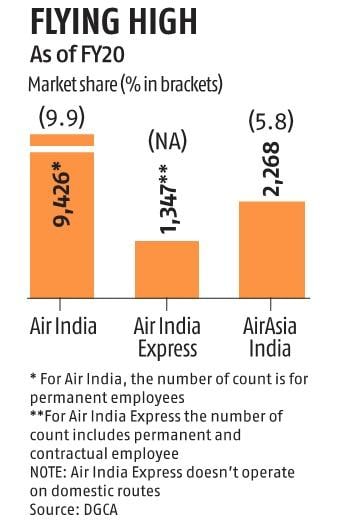